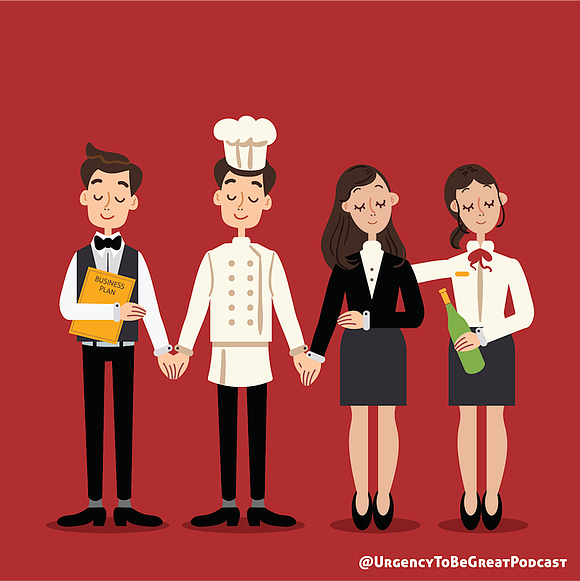 Even when he was in school, Miguel Morales had the drive to create, innovate and stretch his imagination to make a living. What he didn't realize at the time is that this desire would reveal a career path he had never considered: restaurants.

In this 2-part podcast episode, the renowned restauranteur shares priceless lessons on how calculated planning in conjunction with continuous, team-inspired innovation can pave the way for success, whether you are in sales, marketing or own a business.

The path of innovation may seem full of imagination and whimsy. You might picture a room of hipster thinkers, fueled by Starbucks and surrounded by white-board walls for hours and hours of brainstorming. And in some cases, maybe you're right! But the process that these trailblazers take are far from wayward or haphazard.

As cited by in an MIT Sloan Management Review article, there are 5 stages of successful innovation:

Contrary to the "leap of faith" reference often applied to the transition for corporate-turned-entrepreneur professionals, Miguel reminds us that there is a method to the perceived madness.

"In general, it is a leap of faith, but it shouldn’t be a complete leap of faith," he said. "It should be pretty calculated. So, that was how I took a lot of the fear away."

His vision for becoming an independent restauranteur came after more than a decade of learning the inner-workings of a corporate establishment, which he later led. He became inspired to create more beyond that brand and guest experience. Above all, he saw a future of relationship-building, where motivated, passionate people could become part of his team and learn the business much like he did to eventually become operators within the network.

Checking in with his key supporters—his family—was the next step. "Being married, having daughter—it’s not a decision I could make on my own," Miguel explained. "I had to figure out that move based up on them."

As such, his biggest advocate in the process was his wife, who helped him consider all the factors that came into the new business concept as well as how it would affect their family. Savings for their daughter's college became part of the discussion as did life insurance coverage. Everything that seemed distantly related was brought to the table to make sure the romantic idea of operating an independent establishment was put through the proverbial ringer.

Equally important to Miguel in this decision-making process was the team that would join him in his venture.

"The biggest thing for me is that I wasn't leading people astray," he said.

Regardless of what he advised, there were people who were dedicated to following him from the corporation where they all worked together.

"Some of these people had 12–13 years with this company as well, and they were about to get their break," Miguel added. "For them to leave and follow me, I was not just making a calculated decision for me; I was making sure that their money could go up."

The next step was to look at the feasibility of the business itself. Could it turn a profit for his family and his team?

"We broke down the numbers and all the profit and loss statements," Miguel said, "and literally dissected it, and flipped it backwards…to figure out how much sales we needed each month, each week."

They tried every scenario. They tried to break the process and find the weak spots, taking everything into consideration: loans, partners, space commitments, their team. After all the number-crunching, there was no denying that even on the most improbably slowest day, they could still turn a profit and support the team.

“It took us about 2 years, so we didn’t jump," Miguel admitted. "It was a calculated decision. Our only move was to open our own business, and fully own it—no partners, no investors, anything of that nature."

Miguel shared that he already had a concept in mind for his restaurant and that it would be located in his neighborhood, an area of Chattanooga called St. Elmo. He knew the locals love their area, but didn't have all the dining options that Downtown Chattanooga offers. By bringing a new eatery that appealed to everyone to St. Elmo, Miguel felt that he could foster the community and its needs.

"I wanted to build a place that’s very comfortable for blue collar, white collar, every walk of life because that’s all my friends," Miguel said. From that he envisioned a "burger spot" where everyone would feel at-home and enjoy a selective menu for dinner dates and family outings.

He explored the idea, outlined the concept, found a location and went to work on his vision: 1885 Grill.

According to the MIT Sloan Management Review article, "diffusion is the process of gaining final, companywide acceptance of an innovation, and implementation is the process of setting up the structures, maintenance and resources needed to produce it." From a team perspective, Miguel was fortunate to have "key individuals" who already had a vested interest in his vision and trusted his leadership.

"It’s all about the people," Miguel said. "Our business brand and business model would not continue to grow if I didn’t have good enough people to take me out of operations and concentrate on business."

And step out of operations is just what he did. Now having a full view of what was unfolding, he led his team to become expert observers (a implementation element of this process). The goal of Miguel's innovative idea was not to make money but to create an establishment that appealed to every demographic in the neighborhood. Therefore, as soon as the doors opened, his team began taking notes.

Because building a business is no exact science, there is always a chance for the unforeseen (the unscientific Stage 6). For Miguel and his team, it emerged simply from asking questions. They discovered that their guests liked what they experienced...but they wanted more: a bigger filet, a bigger ribeye, more expensive bottles of wine, etc. Miguel and his team quickly learned that a nearby white-collar community had bigger hopes for the restaurant. As a result of the feedback, 1885 Grill became a Southern coastal restaurant with a menu that is fitting for every occasion: a family dinner, a first date or to celebrate a wedding anniversary.

"We never realized this small place would be a high-volume restaurant," he said. To adjust, he collaborated with his chef to get creative with ways to cook faster and prep smarter without sacrificing quality. He reorganized the space to preserve the dining experience. Miguel also explored expanding into adjacent spaces once they became available for lease. Over time, he explained, the team was able to further innovate the original idea to be exactly what the community wanted.

“Once again, it’s our people that continue growing us and continue making us able to do what we do—it’s their vision," Miguel said. "We’re still everyday taking notes and figuring out what we have to do next for that thing to continue growing."

Part 2 of this episode is rich with details on Miguel's role in talent development and marketing. He outlines tactics that work—and don't—and how he is successfully scaling his business plan with contrasting venues in different communities. Check it out by visiting UrgencyToBeGreat.com when it drops on Monday, Nov. 5!